Getting to the Yucatán

With direct flights* from Los Angeles, Houston, Dallas/Fort Worth, and Miami, as well as connecting flights through major Mexican hubs such as Monterrey and Mexico City, the Yucatán’s capital, Mérida, is closer than many think. Already on the peninsula? The city is a pleasant drive away from most other destinations. 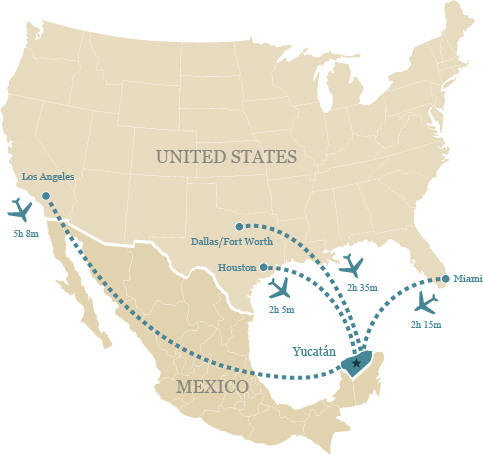 Major U.S. airlines serving MID directly include United Airlines and American Airlines. United flies from Houston, while American flies direct from their hub in Dallas/Fort Worth.

Delta Airlines partners with Aeromexico, which flies from Miami, Houston, and Los Angeles.

The Mexican budget airline Interjet flies to U.S. cities such as Las Vegas, Miami, and New York through Mexico City, while its competitor, VivaAerobus, flies from Houston through the Mexican capital.

For those already on the Yucatán peninsula, MAYAir offers daily flights from Cancun and Cozumel.

*Flight information is subject to change. Check with airlines for accurate and up-to-date information.