Built on the site of the ancient Mayan city of T’Ho, Mérida is the vibrant capital of the Yucatán that was founded in 1592 by Spanish conquistadors. The city’s architectural heritage — which stretches from the Catedral de San Ildefonso, the first cathedral built in the Americas, to the Gran Museo del Mundo Maya, the city’s contemporary monument to Mayan art — exemplifies the bustling mix of cultures on display here. 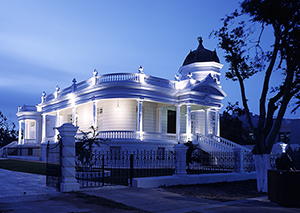 The heart of Mérida is unmistakably the Grand Plaza. Bordered on all sides by some of the city’s most aesthetically pleasing landmarks, including the 19th century Government Palace. Locals and tourists alike go to gather with friends in its leafy plaza to take in daily music and dance performances. And, on Sundays, shop for hammocks, Panama hats, chocolate, and crafts at the city’s enormous weekly street fair.

From the plaza, most of Mérida’s attractions are within easy walking distance, which makes exploring the city a pleasure. Walk the tamarind- and oak-lined Paseo de Montejo, Mérida’s take on Paris’s Champs-Élysées. Make your way to museums, including the Contemporary Art Museum (MACAY) and the Regional Museum of Anthropology, and stop at the city’s lively outdoor cafes, bars, restaurants, and galleries in between. Then, as evening sets in, hire a horse-drawn carriage for a romantic ride around the historic downtown.

At the end of the day, no trip to Yucatán is complete without a stay in a historical hacienda. With options dating back as far back as the 17th century, downtown Merida’s finest haciendas include Mansion Merida On the Park, founded in 1644, Casa Azul Hotel Monumento Histórico, itself a recognized Historical Monument from the 19th century, and the award-winning Rosas & Xocolate Boutique Hotel (1909), among others.