While Chichén Itzá and Uzmal are unquestionably the jewels of Yucatán state, it is the lesser known treasures that keep visitors coming back.

Lesser-Known Archaeological Sites
There are more than a dozen Mayan sites to visit: from Dzibilchaltún, an archaeological site that has been continuously occupied for thousands of years, to Xcambo, a rare pre-Hispanic coastal settlement that is still being excavated today, and Ek Balam, whose 100-foot La Torre pyramid offers a view of Chichén Itzá in the distance — to name a just a few. Yucatán has plenty more intriguing archaeological sites waiting for travelers to discover. And with fewer visitors, you just might have the place to yourself. 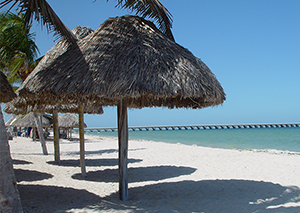 Beaches on the Yucatán peninsula do not always have to mean crowds. The state’s northern coast boasts miles of pristine white-sand beaches without all the party-goers of nearby Cancun. Starting from Progreso, head east and explore the beaches of Chicxulub, San Benito, and Uaymitun. For a unique snorkeling experience, travel inland to one of the state’s many cenotes to marvel at the deep turquoise water below and the jungle-framed skies above.

Magical Small Towns
Each of the Yucatán’s many small towns has a unique blend of history and culture. Izamal, for example, boasts Mayan pyramid ruins, a massive Franciscan convent and an entire city center that glows in yellow-ochre paint. Coastal Celestun features a nature preserve brought to life by flocks of wild flamingos. And the almost 500-year-old city of Valladolid gives visitors a taste of the real Yucatán while also making a great base to explore the eastern half of the state.

Culinary Experiences
As the official “Latin American Capital of Gastronomic Culture 2016,” Mérida is helping put the Yucatán’s cuisine on the international map, and the state’s culinary gems are not to be overlooked. Do not miss local specialties like cochinita pibil (pork in savory achiote sauce), the many styles of Yucatán-style tamales, great seafood dishes, and Caribbean-influenced staples such as black beans, fried bananas, and yucca root. For dessert, treat yourself to the taste of real criollo chocolate at Ki’Xocolatl in Mérida before visiting the Ecomuseo de Cacao to learn all about chocolate.